We left HCMC 2 days ago. Signs of the delta are everywhere – houses and paths, soccer fields and roads built just above water level, rice fields lining the highway and in the central median. Ducks and aquaculture ponds litter the countryside next to banana plantations and cassava fields. A strip of development follows the highway in most places, preventing views out across the delta and ensuring that traffic stays heavy and constant.

A typical canal in the delta at flood stage

And the biking is fast! Perfectly flat roads as far as we could see made for relatively easy biking – we’re averaging about 20km/h. Makes you wonder why more people aren’t pushing pedals. But  the humidity more than compensates for the ease of the terrain, and we quickly tire in the soggy, dripping heat. The solution? Vietnamese ‘rest stops’ that should be copied the world over. Sun too hot? Tired of riding the motorbike? Pull over under the shade of a bamboo grove, kick off your sandals, lay back in a hammock and sip on some iced coffee, maybe take a nap. A momentary but necessary relief from the burning sun. These places are everywhere. 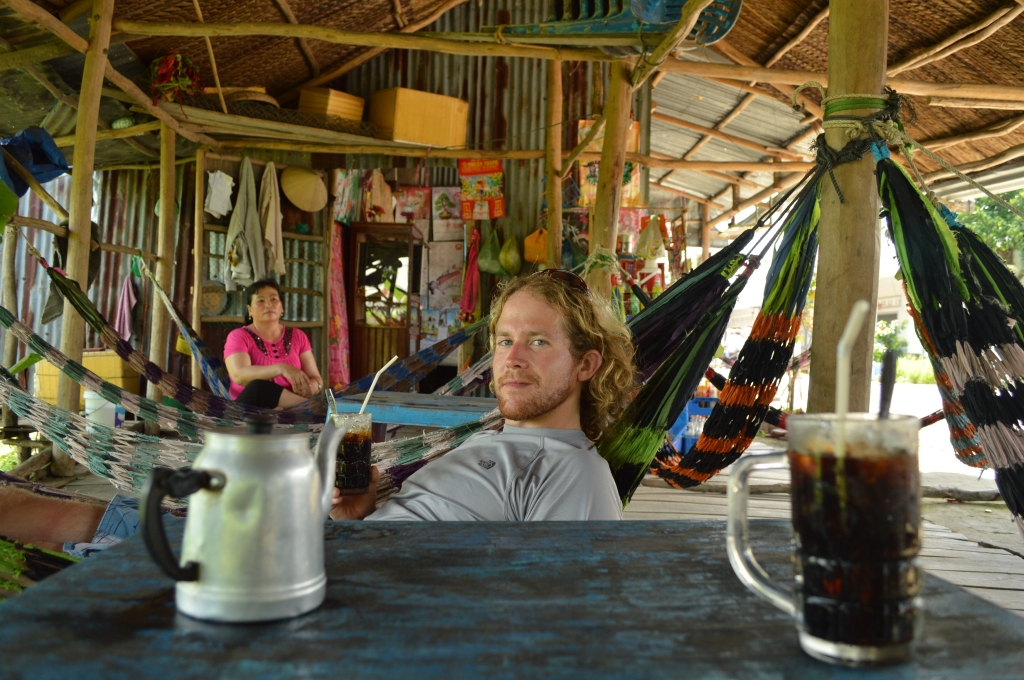 Best iced coffee we’ve ever had. By far.

It felt wonderful to leave the noise, pollution, and craziness of the city behind, but the traffic, unfortunately, has stayed with us the entire way. We’ve been avoiding the main highways for that exact reason, but the sheer density of people means that the roads are always full of speeding motorbikes, trucks and buses. In HCMC, the motorbike was king. The same is true of the delta, but we’ve seen a twenty-fold increase in the number of cyclists relative to motorbikes. In the city, bicycles comprised 1-2% of traffic, here it’s 15-20%. Most of the riders are children, young women, and older men and women. Basically, the segments of the population that can’t afford a motorbike. Out here, motorbikes make a lot of sense though. People use them to carry everything imaginable – from bags of rice to live pigs or crates of ducks. And they’re relatively fuel efficient, averaging around 25km/liter (60 mpg).

Our desire to leave behind the trucks, exhaust, and noise of the major highways uncovered a slight oversight in our preparations. We have no maps and no compass. Oops…..

Water buffalo grazing in the fields

It’s actually a major oversight, and we’ve been navigating the back roads (poorly) via a combination of the sun, printed Google maps (that show nonexistent roads), asking directions (constantly), and making wrong turns. We’ve gotten lost 7-8 times, but have always found a friendly, helpful local at each dead end who showed us the way forward, or back.

The food continues to impress, and its abundance is perfectly suited to the needs of a bike tourer. There are food shacks at least every kilometer, and drink shacks are twice as prevalent. Fresh cane juice beats gatorade x1000, and we’ve been experimenting with the fruits of the mekong – ate our first durians, mangosteens, rambutans, longans, and dragon fruits. The current favorite is the mangosteen – a perfect blend of tangy, sweet, and refreshing flavor.

Alex at food stop #4 of the day

We arrived in Can Tho this evening after crossing a 2km suspension bridge over the Mekong. Built by the Japanese in the past few years, its orange cables and twin concrete towers make it an architectural icon. Overall, Can Tho was disappointing. More of the same relentless motorbike traffic that characterized HCMC, a sweltering haze of exhaust smoke, less character and more hassle than the smaller towns we passed through.

Tomorrow we head west towards the coast – a last minute change in itinerary – eager to leave behind the grit, noise, and industry of Can Tho and the other busy delta cities. We eagerly anticipate the ocean breeze, be it not a headwind.

1 thought on “Getting Lost in the Mekong”