We left the city with eight days left on our visas. We risked a fine – or less likely, jail time – if we didn’t exit Thailand by the fifth of August, so we shoved off, moving happily away from the hum of density.

We say goodbye to massive infrastructure

We biked away from our hostel with the feeling that cycling, as a cultural activity in Bangkok, was either an impossibility, or was at best a long way off. It’s a sprawling city, packed with cars and motorbikes. Nowhere to find peace for miles…  And then on the way out we found ourselves in the middle of something like a benevolent version of “Critical Mass.” Fifty or so cyclists toured the streets together, one with a bull-horn – members of a group devoted to the sport. They occupied a whole lane, moving as one, and cars slowed and passed with caution and respect. Optimism. Five minutes later we saw a motorcycle crushed under the bumper of an SUV, a man writhing in pain. Traffic is less like a dance in Bangkok, more like a mosh pit – if you’re wise you learn to stay away from the big guys.

Confusion on the way out

We weren’t sure how bad this push to the border was going to be, but we knew we were in for a sprint. Our parents, saints that they are, had sent us maps, and we’d picked out a tentative route. Instead of heading due north we’d go back, east along the border with Cambodia into southern Laos (after five weeks of semi-suffering in the hot, humid lowlands and megacities of SE Asia, moving north through Laos over the next three weeks is our gift to ourselves). Having picked out the smallest and least inhabited roads through Thailand, we anticipated a better experience than our clenched-jaw entrance into Bangkok. It would take us through two national parks, we’d skirt the least accessible park in Thailand, and mountains would nearly always be in sight.

There were hundreds of monkeys at a random, cliff-top Buddha shrine

Well… things don’t always go as planned, but they always work out in the end. By the close of our second day we had successfully navigated through the maze of back-roads that was our route, but as night fell we hit a roadblock. “No bicycles.” Why? “Elephants in the road, danger.” Can we camp here? “No, elephants everywhere, they’ll trample you.” After a considerable struggle with language, the nicest military people in the world offered to truck us through to the next town. Did we cheat? Not sure, but indeed there were elephants – 20 or more, foraging on the side of the road. Tough to imagine the reaction we (and they) would have had if we’d encountered the pale giants in the dark – moving in the weak light of our headlamps as we pedaled silently through the jungle.

We remembered this experience vividly when we arrived in Pang Sida National Park the next day. We entered the park at dusk, knowing that we had 20km to go and 400m of elevation to gain on a gravel road, before the first campground. The jungle’s thick where it hasn’t been carved away, impossible to find a hole big enough to lie down in – no roadside camping here. This was our first significant climb of the trip, and it felt good. We passed a waterfall, tentatively swam with skin-nibbling fish and spooked a 6ft-long monitor lizard. Signs proclaimed the biodiversity here. Elephants! Tigers! Good. Darkness came quickly and we could see elephant scat in our headlights. We spent the next two hours speaking jibberish (in our toughest sounding voices) and singing to the jungle as we huffed uphill, hoping our idiotic human sounds would deter a would-be man-eater/trampler. But we made it.  Relief. 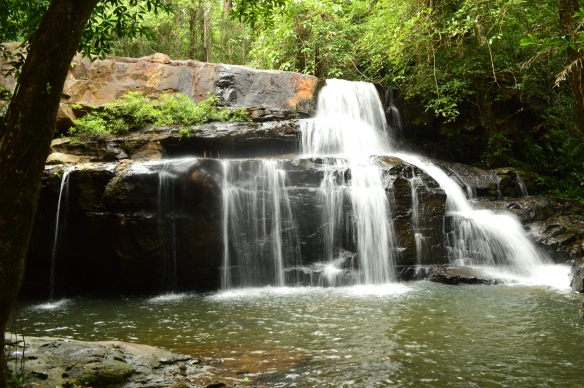 In the morning we saw a ranger, and his news made our hearts sink. Laughing, he told us that the road we had planned to follow east didn’t go through. “Washed out. The road is a river, heh. The mountain came down on it.” For how many kilometers? “Starts 20km from here, out for 33km after that.” Still laughing. We considered our options, but in the end we didn’t have the time, the food or the energy to carry our 100 pound bikes for 30 kilometers through jungle. There would be no epic crossing of the two national parks, and we’d made what amounted to a 100km wrong turn. It was beautiful though, and our legs and bikes had withstood their first real test of the trip. Onward.

We moved smoothly for a while after that. Things balanced out. We finally began to feel like we were truly biking. Our legs were strong and our bodies felt good. The scenery was beautiful, a tail-wind helped push us over the rolling hills, and our attitudes were changing. We were beginning to remember what it feels like to be on the bike every day. We stopped for a night in a small, solemn town on the border with Cambodia, and in the morning we planned to cross over for a peek at one of the country’s most inspiring, cliff-top temples. Fighting at the border though, so we turned around and biked back to town with newfound respect for the severe faces of the soldiers we passed.

Every town we stayed in was extremely welcoming, and the first people we talked to nearly always pointed us to the town’s “resort” or “bungalow”. When we arrived at the locale, the reaction inevitably fell somewhere between confusion and laughter, and we were set up in an air-con room complete with red lights, pink walls, a sex chair, condoms on the towels and a TV in a locked cage, set to the fuzzy channel with naked people doing naked things. It seemed that there was a whole culture in this part of Thailand devoted to finding a “lady for the boom-boom.”

The days were nice. Touring is so much greater off the beaten path. People are warmer and genuinely interested, the scenery’s better, and you’re much more likely to experience an unscripted, amazing moment. The question, “what are you doing here?” in the most perfect of tones. A smile and wave instantly lit up the faces of everyone we passed, and they gave us beautiful, unrestrained grins. Every day brought us closer to Laos, and the rest day that it promised. We felt good, but every morning still felt like those elephants had indeed trampled us in our sleep. Pakxe was our promised land – the place where we could sleep in.

Through the push we’d been averaging 135km a day, most days biking into the night. The worst thing about biking into the night? The clouds of bugs that collect under your eyelids and fill your nose, mouth, and ears at dusk. The worst thing about being bald? The bugs that get trapped in the gap between your scalp and the helmet, and squirm through their agonizingly itchy, impossible attempt at escape. We must learn to avoid this.

On the 5th of August, the last day of our visas, we biked out of Buntharik toward the border. Only 60km to go before we crossed, moving quickly with a delight inspired by the man who made us free, custom Thailand stickers for our bikes. People are good. 40km down the road we ran into some nice ladies who gave us clear directions to the border, through a confusing intersection that lay ahead. “We saw two cyclists pass here an hour ago, going the same way, maybe you know them?” Nope. Were they women? (The two mythical bike-touring ladies that had haunted our dreams?) “No, they were men, looked like you. Bikes like yours.” We broke conversation, thanking them, anxious to catch up with these cyclists that were apparently headed the same way. Barely five minutes passed before we saw another sign for the border – Chong Mek: 55km. We had done a perfect loop and were 5km from where we started. Shit. We never did catch those two cyclists…

We reached the border an hour before it closed, crossing at dusk and with storm clouds brewing on the horizon. Twenty failed takes and an hour later, we had a usable video update (upload to come) for the blog, but no light left in the sky. No Laotian money, no way to eat, we pushed toward Pakxe. 50km yet to go, all of it in the dark. But we made a peaceful entrance. Compared to Thailand, the roads were broad and silent. The dogs in Thailand had growled and chased us, but here they just barked and howled from afar. When we finally hit the town, starved and more dazed than we realized, we found an ATM, then sat down to eat at the closest restaurant. They served hotpots, and we quickly made fools of ourselves in our ignorance of how to eat it. But it was delicious and big, maybe the best meal of the trip. Rolled into town at 10:30 and crashed hard. Awoke with the light today and saw the Laos that we’d missed on our way in. Mountains in the distance, and a sleepy wonderful town. We’re here. 30 days on our visas and we plan to fill them with goodness. Tomorrow we move again.

Thai side of the border post. Useless monster building says: “we’re better than you”