Thinner and uglier, but a hell of a lot wiser

So this is it. Delhi was the last blast in a string of unfamiliar worlds. We’ve biked through these worlds and soaked up the landscapes and cultures, trying to let them change us. Yet all of them remain foreign, because each experience was fleeting. That’s the thing about a trip like this; the nature of a bike tour means that there’s no place to miss. All it is, really, is a lifestyle. We decided to live a certain way for six months. Almost every day we moved, and if a routine set in it didn’t last. Every day we woke up in a different place, and experienced a different world of people and climate and roads and hills and emotions and even the ‘change’ changed. Will we miss the lifestyle? Time will tell, but as our taxi lurched through the city on the way to the airport neither of us felt any qualms about saying goodbye. Strangely in a daze, we didn’t really feel anything at all. We’ve amassed a world of experience, and the proof might be in the photos, but the truth of it will only be felt by those who know us, because even we can’t identify if and how we’ve changed. In the end, that might be the only thing that matters.

Delhi is the biggest city either of us has ever seen, and it provides a fitting cap to our urban-Asia onslaught. Mentally, we’ve been done biking for a while now, but we decided to make the last ride from Agra into this massive urban jungle purely out of principle. It’s rough here, and no one in their right mind should bike Indian highways for enjoyment. But we had to, and we’re glad we did. Urban India provides a glimpse into what might happen if we grow without thought, and if motivated people don’t push back against the overcrowding and say wait, this isn’t how we want to live. Or maybe this is what will happen if it all just goes to shit.

When people speak of India, they inevitably mention how crowded it is. Shoulder-to-shoulder, waves of people, streets packed to the gills; bumping, coughing, smelling, shoving, haggling, shouting, spitting, honking. In many parts of Delhi this is true. On one of our days here we stepped down into the subway to catch a cheap ride back to our place and were so overwhelmed by the amount of people that we stopped, found a seat on a step, and stared in amazement for five minutes. We then walked back out of the subway to find a rickshaw that would take us the same distance for 1000% of the cost (two dollars).

Delhi is not the soul of India, nor is it a cultural hub, though you can find plenty of it in the crowds.  It’s known as the power center. Politics are played here, and money is made. ‘Important people’ abound. It’s a place where the disparity of wealth is extreme, and people are socially stratified by economic worth. The disparity is huge and visible, and wealth comes with a perceived sense of entitlement that is overtly acted out between people on the street. We don’t know what it’s like to be a poor Indian, thanks to Vishnu, but we get a taste of it every time we get on our bikes. Big, expensive cars denote importance, bigger cars even more so, and there are no rules on the road besides remembering that. If one is coming at you, the rule is you get out of the way or maybe die, or maybe not, and who cares. Bicycles symbolize poverty, and on the road we live on the scraps of road that the cars let us have. The least enlightened of them would say we’re lucky to have that.

At the other end of the social hierarchy, vast slums fill the empty spaces in the city, some of which we’ve seen set up in the trash on the banks of a massive open sewer, so foul that you can taste the stench on your tongue when you walk near it. Crack fiends freebase publicly on the stoops surrounding an upscale shopping mall, and every day we walk past the immobilized bodies of diseased sidewalk dwellers, for most of whom it appears that “dwelling” is actually too positive a word for their existence. Delhi is sorely in need of projects and initiatives that attack these public problems. But the way the system is designed, there is no money for public projects. The money, no surprise, goes toward new and improved development for the rich. 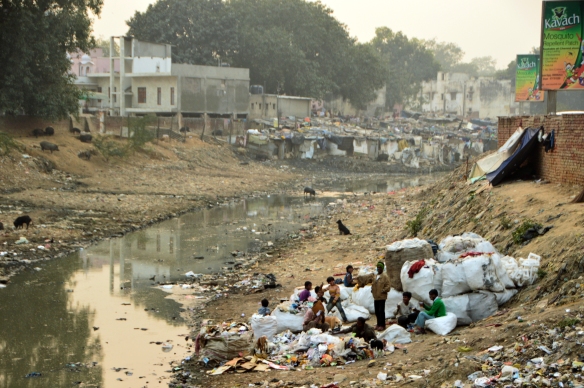 The inequality plays out in gender roles, too. The city is still reeling from news of a brutal gang-rape that happened to a girl on a public bus 5 days ago. The news has sparked outrage and a series of protests against the subjugation of women in male-dominated Indian culture. The protests have galvanized student groups, activists, women’s groups and cyclists. Gaurav, the founder of a large cycling group in Delhi, told us of a protest ride that they plan to do on Saturday to promote women’s safety. It’s tragic to see an entire culture subjugate the half of its population that brings energy, life and love into the other half. But it’s inspiring to see these groups coming together, and to see the bicycle used as a vehicle/symbol for protest. Hopefully the same culture that both necessitates and provides a women-only only subway car can come to terms with the oppression that this represents. 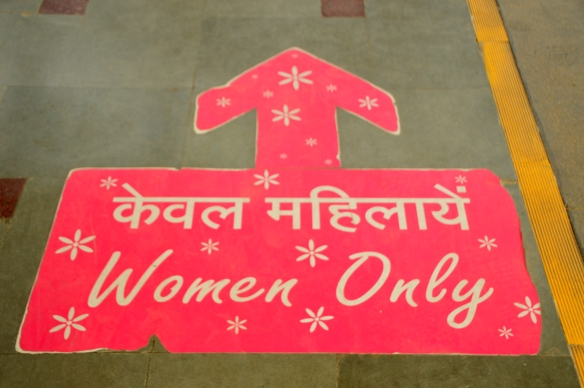 We arranged a free place to stay in Delhi, through the generosity of one of our former professors. He’s come home to India to raise a family and practice landscape architecture. We slept on the floor in an extra room of his office, and tried not to bug them when we took our bikes out to bug other people. This setup has made the last week feel more like a transition than an ending. We’re reminded, after six months of travel, what it means to be in a design office, and what it is that we’re going back to.

In a way we’ve been sitting still in time, journeying instead of thinking about ‘real life’ back home. Learning in our own way and suffering for the love of it. But time is about to hit us like a train and drag us with it. Routine – that four-letter-word that scares us both to death – is coming. Being sedentary and dull – experiencing boredom – is what scares us most. The biking has been tremendously tough at times, but toughness comes packed with extreme and vivid memories. Memories don’t come from routine, and you don’t remember comfort, but we will always remember (almost) all of this with a huge grin. Fortunately, we’ve learned from experience that even in a routine day, if you get on a bike, you will come home seeing, and feeling, more. And if you travel a bit by bike, you will feel like you’ve seen everything. The only thing going against you is the damn traffic. And, you know, good luck with that.

We board a plane in a few hours that will take us home, to familiarity. The unexpected has become a way of life, and there’s no telling what we will feel when it leaves, but we’re looking forward to it. The comfort of family and friends may not yield the vivid memories of travel, but it gives us shared ones, which in many ways are more important. So get ready for some love, everybody. We’re done, and we’re coming home.

Before and after – what have we done to ourselves?